There must be something in the water at Carl’s company, because many of his coworkers have become or are becoming parents recently. I made one of these elephants in the craziness of the week before Christmas, but forgot to take photos.

This one, I made this week.

Once again, I’ve gone back to Simplicity 2613 to whip up a baby gift, this time for one of Carl’s coworkers. Rather than sew the elephant for a third time, I chose to make view B, the giraffe. To be entirely truthful, I constructed this a while back, but never finished stitching the felt eyes on or stuffing it (which is how I “sewed” it despite my sewing machine being in the shop). 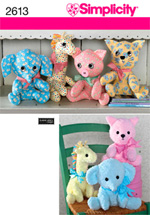 For the mot part, the giraffe was as easy to build as the elephant, however I did find a few issues to keep in mind.

The arm openings are very tight, so a tool to help push in stuffing is very helpful. More importantly, I found that the quilter’s flannel I used wanted to separate at the shoulder seam. For best results, reinforce the curves with a second line of tighter stitching just inside the seam allowances. Since I didn’t realize this until after I’d begun stuffing, I darned over the corner with matching thread. The hidden reinforcement would have been better.

The importance of a proper stuffing hole

When I constructed the body, I was on auto pilot sewing all the pieces together and forgot about leaving an opening for stuffing in the suggested center back seam. By the time I realized my mistake, the only remaining logical place to leave open was the side neck seam, since I didn’t want to rip any stitches out.

It wasn’t until I actually began stuffing that I realized how unwieldy it was to stuff through the neck. In hindsight, it would have been worth it to rip out the back seam to leave a proper stuffing opening.

I still can’t figure out how to get the limbs to fall as cutely as they do on the pattern envelope. I think it has to do with the stuffing, but it is quite mysterious (unless of course they used hidden pins for photogenic toys).

A note on the neck ruff 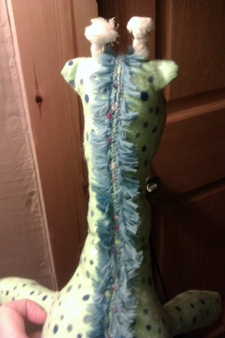 The suggested construction calls for fringe with adornment on only one side, so that you can sew the unadorned side straight into the seam. Mine was double-sided, so I first sewed the center-back seam together, then topstitched my fringe down on top of it, folding the bottom edge under for a nice finish. The top edge was sewn into the side seam as one piece with the back.

Just keep in mind that you can use any fringe/ribbon—with adornment on one or both sides—even though the pattern instructions aren’t provided for the latter.

Like the two elephants I made from the pattern, I added a small rattle-like creation to this stuffed animal. It’s really quite simple to make.

Start with the metal bases of two tealight candles (mine are from a pack of Ikea ones, but I imagine any will do, so long as they have metal-ish base). It is best to use the bases of un-used candles, so you don’t have to deal with melted wax. The candles I have just slip out of the base with a slight tug on the wick. I put the container-less candles into other, larger candles that have burned to the bottom (leaving a wax cylinder) so as not to waste a perfectly good tealight.

Partially fill one with grains from your pantry (in the past I’ve used basmati rice, but this time was couscous. I liked the result a bit better). Play with the amount for desired sound. 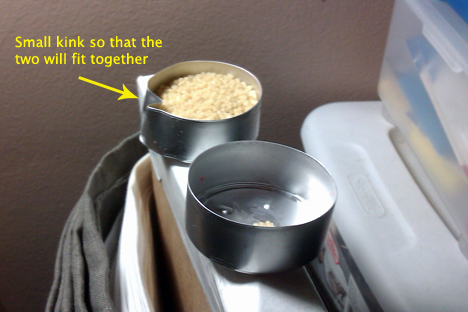 Place the second candle base over the first, trapping the grains inside. You might have to add a small crease in the side of the inner one to get them to fit. 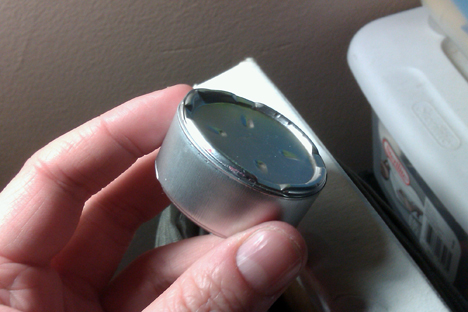 Wrap in duct tape to waterproof/seal the halves together. 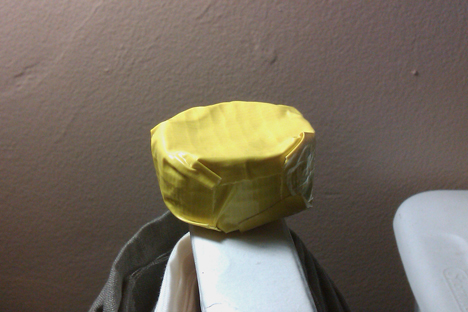 In the future, I want to try using hot glue (or perhaps melted wax) to seal the rattle, because the duct tape muffled the sound a bit, but alas, I have no hot glue gun at present. My last roll of clear duct tape was less muffling than this new roll of yellow. The whole thing is very unscientific, so play around to find what suits you best.

The result was another quick creation that I hope the new baby will enjoy. 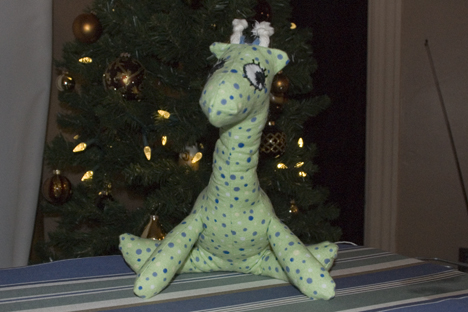 I’m visiting my friend Sammi and delivering the baby quilt this coming weekend. Here’s a sneak peak of the quilt, and a shot of the elephant I made out of the leftover material. It’s Simplicity 2613 again. I used each of the four colors for each piece, and the border fuzzy yellow fabric for the ear inserts. The scarf is made from the backing fabric with little pieces of selvage on the end—they made perfect fringe.

The quilt is in the wash right now; I’m having a bit of an issue getting the yellow chalk lines out that I used as a grid for quilting. One wash didn’t work, so if they’re still there, I guess I’ll just have to claim they were a design decision or something. At least they match the color scheme. I learned my lesson about using chalk in the future though, that’s for sure.

Carl’s sister is expecting a new addition to the family this week, and I wanted to make something personalized for the baby that can still be used as a toy, not just some pretty thing that is never touched. The local fabric store was having a five for $5 sale on Simplicity patterns this weekend, and it was kismet: an adorable Two Pattern Piece Stuffed Animal collection. I think it was the vintage-y calico prints that sold me, but also the simplicity of a two piece pattern, as I’ve never attempted something like this.

This pattern set comes with pieces and instructions to make four animals: elephant, cat, giraffe and piglet. I thought the elephant was especially cute with its little trunk, so that was my decision for this project. I have plans to make at least two more in the near future, including grandiose thoughts of modifying the pattern to make a bunny or dog.

This was an extremely simple pattern to construct. The directions were very clear, and it’s all pretty simple construction. They even do a pretty good approximation of where curves need to be clipped on the diagrams. The biggest issue beginners might have would be sewing the curves (just go very slowly). If worse comes to worst, someone who is having issues with the curves around the corners of the limbs could just make sharper 90° corners.

It took about 45 min to cut out the pattern and pin up the seams. The sewing part was actually very quick, and was done within about 15 min (with the exception of the back stuffing hole). The rest of the time was experimenting with/completing the personalization, stuffing, doing the eyes, and sewing up the back by hand.

One thing I don’t understand

The pattern calls for substitution of “safety eyes” instead of the felt ones if the animal will be used as a toy. I don’t understand why hard little plastic pieces would be preferable to soft, well-attached felt ones. The closest explanation I could come up with is that the felt could easily be ripped off and swallowed, but somehow the hard plastic pieces can’t be (really?).

I decided to make the felt ones, but with a modification for safety: rather than making the eyes out of two contrasting pieces of felt that are glued or hand stitched on as called for in the pattern, I used one white circle of felt and created the pupil with hand-sewn black embroidery satin-stitching straight through the felt into the body of the animal. This change ensures that the felt eyes are very securely attached—the baby would have to somehow remove all of the embroidery to get those pieces off. If the parents choose to keep the toy away from the infant in light of this “lack of safety,” my feelings won’t be hurt, however I don’t see how it’d be an issue.

Maybe I’m projecting here—I still have the very first stuffed animal given to me tucked away in a box somewhere. It is a little pink bear that rattles, which my uncle bought in the hospital gift shop. Its name is “Jiggles,” and it wears a t-shirt that says “baby’s first bear.” But regardless of my reasoning, I thought personalizing it would make it a great keepsake. My decision: embroidering her name and birth date on the ears with the simple embroidery functions on my machine. I could do it by hand, but it’s been many years since I tried to do any lettering, so the machine sounded like a good choice. Since they’d already decided 100% on the name, and the baby is scheduled for surgical birth, I can do this and have it ready for the big day.

In testing (always test these things), I found that the background print on the fabric I chose was a little too busy to allow lettering to show up well, even with a contrasting color. I had some white 100% wool felt remnants leftover from a previous project, and decided to make an insert for the ears with the personalization. This sets off the lettering (the best use I’ve found of it on this machine function so far), and gave a little more interest to the solid patterned toy.

Even though the ears aren’t stuffed according to the design, I choose to leave all stuffing out until after I’d sewn on the ear patches just for sake of easy maneuverability with the machine. The body being stuffed would make it a little more difficult and I had no desire to do it by hand. If you are doing this and don’t have the convenience of knowing the name and date before birth, it is still possible to get everything ready and add the patches afterward, but will likely need to do it by hand. Or, it might make a great meet-the-baby party gift after you know all the details.

Making it More Fun (for the baby)

The second modification I made was adding a rattle. Annoying to the parents? Perhaps, although I’m sure no where near as annoying as the newer electronic toys are. Endless hours of entertainment for a developing infant? Definitely.

Getting creative here, I used the empty shells of two tea lights with a little rice inside. Completely encasing it with clear duct tape provided a great seal that should stay water-tight if the animal is washed. I added the rattler it to the middle of the body wrapped in a little bit of spare batting I had, and put in the rest of the stuffing around it. It can barely be felt through the stuffing. It’s not loud, but does provide some audible interest.

Now, I just need more baby nieces and nephews to sew cute things for! This wasn’t the only adorable pattern I bought.