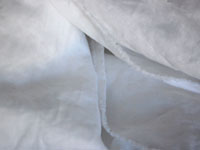 I’m a big fan of natural fibers, mainly because they feel better against the skin. I especially like linen, which is cool in the summer, has a nice weight and hand, and is also historically accurate for costuming purposes. Unfortunately, linen is uncommon in fabric stores and relatively expensive here in the US (especially when your only local fabric shops are JoAnn Fabrics and small quilting-only places). And when you’re really trying to be a frugal sewer and the average prices online ($8-15/yd for average quality) are still too much (like, say, always), one often has to make sacrifices. My recent sacrifice was trying a fiber I’d never heard of, ramie, and I must say, it doesn’t seem like much of a sacrifice at all.

Despite the shroud of mystery surrounding it, especially in the US market, ramie is evidently one of the oldest fibers cultivated for textiles. Commonly called China Grass, it is grown and used mainly in southern and eastern Asia (with some production in Brazil). Only a small percentage of the overall production seems to be exported for use in Euro/America. Ramie fibers are naturally white, which reduces the need for bleaching, but in order to be used in textiles, they require extensive processing, including de-gumming. The fibers are also very strong and—like linen—improve in strength when wet with very little shrinkage.

Textiles made from ramie behave similarly to linen textiles. They are prone to wrinkling and will breakdown if sharply creased, so it is best to fold them loosely and store flat. One advantage ramie has over linen is that it is naturally bacteria- and mold-resistant. It holds dye well, although saturated colors can be prone to crocking, which is discoloration of skin or other fabrics that contact the dyed ramie at stress points or wet areas.

Ramie is sometimes blended with other fibers to create cloth that benefits from the properties of two or more fibers. Common combinations include cotton, polyester and wool.

When buying pre-made clothing made from any type of textile, you are best off following the directions provided with the garment. Those instructions have less to do with what the fabric can handle, and more to do with how the fabric was treated prior to construction of the garment. Especially with dry-clean only clothing, even if the fibers can handle washing machines without destruction, shrinkage from the process can affect seams and fitting, leaving you with a ill-constructed garment.

Ramie can handle the same heat and agitation as linen. For the yardage I purchased, I ran it through the same process I do linen to get maximum shrinkage before construction: a hot water wash on the regular cycle, a cold water wash on the gentle cycle with soap to remove any processing chemicals, and then tumble dry low until it is slightly damp. I then iron it at a medium-high setting to complete the drying. This will give maximum versatility when it comes to care of any constructed garments.

Like with linen, repeated washing will soften and dull the fabric, fade dye and cause it to be more prone to wrinkles, so if you’re going for maximum stiffness, smoothness and shine, dry cleaning is your best option.

Unfortunately, like linen, ramie is pretty scarce in the northeastern US—another online-only sort of fiber for me, at least. I’ve only found it on a few fabric discount sites. My purchase was swayed when I found it by the bolt—15 yards in this case—for about $3.33/yd (plus shipping, which still didn’t top $4/yd). Sure, it’s quite a bit of fabric, but I have a few different projects that I’d love to use linen for and hadn’t planned on it because of affordability, so it’s the perfect price for those. Aside from the large amount of yardage, the color selection was also somewhat limited, but at the time I was in the market for plain white anyway, so it again wasn’t an issue.

The ramie I purchased was about 4.9 oz., which falls toward the medium-weight of linen. It has a 60×60 thread count per inch, which is a tighter weave than many of the cheaper (and even some more expensive) linens out there, which results in a higher-quality feeling fabric. When I first received it, the fabric had a bit of a waxy feeling to it. My best guess is that it had something to do with processing/weaving/shipping, because after a trip through the washing machine it felt natural and very much like linen (hooray!). It also has the crisp, stiffness of linen that is lacking in linen/poly, linen/rayon and poly/rayon linen-look blends. All of the other linen-advantages: wicking, breathability, etc. are also apparent. Verdict: ramie as a linen substitute works for me, especially if it continues to be cheaper. I will stick to linen when I need colored fabric, since I don’t yet trust my dye skills.

Should you use Ramie?

If you fit one or more of these descriptors, ramie might be a good substitute for you as well:

Do you have any experience using ramie? What do you use as a linen substitute?