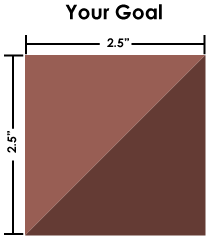 Math’s no fun, at least in my opinion. So, as I get into this whole quilting thing, I’ve been doing more math than I like, and doing it poorly. I have found that Adobe Illustrator is great to play around and piece my quilt blocks together in a digital sense, but unlike quilt-specific software (like Electric Quilt), it doesn’t magically add my seam allowances for cutting out the bits and pieces. My most annoying mistake: sizing half-square triangles.

First, in case you’re asking: a half-square triangle is the triangle created by cutting a square in half diagonally (usually used to create another square of two triangles), like in the image above.

When I went to add seam allowances and cut out my triangles, I made a totally rookie mistake (hey, I am one!): I forgot about the seam allowances needed for the hypotenuse of the triangle. I simply added a half inch to the width and height of my square (a ¼” allowance on each side), and cut down the middle.

In a graphic sense, I did it like this:

But as you can see, that doesn’t give me the right size.

To get the proper size, you need to consider the hypotenuse seam allowance as well, but as is the nature of triangles, simply adding another half inch doesn’t quite work how you want it to.

For perfect half-square triangle measurements cut from squares, cut out a square that is 7⁄8″ larger than your intended finished size, then cut that in half diagonally.

Some people will add a full inch to the final size (¼” on the outside edges and they think two ¼” allowances in the center), cut that and then sew the center seam and trim off the small excess when they realize it’s not quite the right size, but why put yourself through that much extra work? Start with the right size and end with the right size, no extra cutting involved. Just make sure to sew that perfect ¼” seam.

The 7⁄8″ measurement doesn’t change. It is based on the ¼” seam allowances, not the size of the square/triangles. My choice to use 2.5″ in the example was mostly arbitrary.

Does this technique work for you? Do you have another way of cutting out half-square triangles?

3 Responses to “How to Cut Half-Square Triangles”